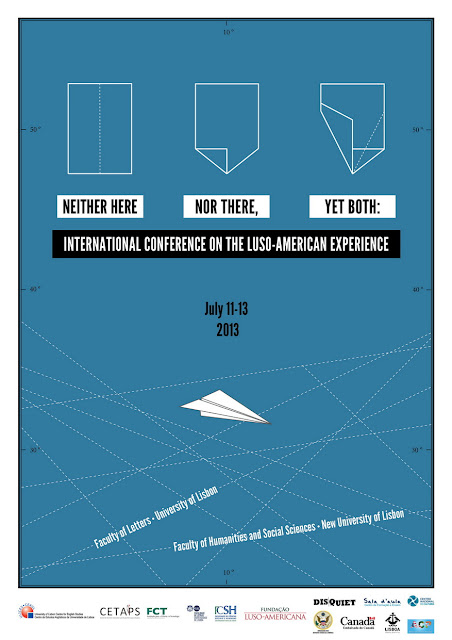 The past decades have witnessed a significant emergence of new approaches to the heritage of Portuguese-speaking people and their descendants in North America, which includes the expression of varied Lusophone communities. The University of Lisbon Centre for English Studies (ULICES) and the Centre for English, Translation and Anglo-Portuguese Studies (CETAPS) will host a conference in Lisbon, July 11-13, where we hope to stimulate the debate on Luso-American diasporic exchanges, with the worldwide participation of those who study, live, endure or enjoy such experiences – scholars, writers, readers, community workers and supporters.
In collaboration with this conference, two related events will take place: the Dzanc Books/CNC DISQUIET International Literary Program, June 30-July 12, in Lisbon, and the IJPDS’s International Conference Exploring the Portuguese Diaspora in InterDISCIPLINARY and Comparative Perspectives, July 25- 27, Indianapolis, Indiana.

The Lisbon conference Neither Here Nor There, Yet Both shall host plenary lectures, dedicated panels and roundtables, parallel paper sessions, creative writing, translation workshops, and public readings. To enrich the Lisbon conference experience, it is also our goal to generate synergies with relevant community events and entities.
We invite all interested parties to submit a 300 word abstract for panels or individual papers.

Abstracts should be sent to: luso.american.conf@gmail.com
Deadline for abstracts: 31 March 2013
Notification on the acceptance of abstracts: 24 April 2013
Selected papers are expected to be published in an international peer-reviewed publication.

Early bird Enrollments (up to 12 May 2013)
General public: 100€
Students, Members of Organizing Research Centres and Participants in Parallel Events (Disquiet and IJPDS Conference): 50€

N.B. 1) Enrollment is only considered valid after payment is made and confirmed;
2) All participants will be responsible for their own travel and accommodation arrangements.
3) Undergraduate and post-graduate students must send proof of student status with their registration.